“I see what you did there…”

Overview: With the upcoming anniversary of 9/11, one has to wonder how far our security-surveillance panopticon prison planet has come. Britons have seen a rise in the Orwellian nightmare, while Americans have had something of a reprieve from the “Patriot” Act, although other forces may be taking over that role. Eyeborgs breeds 1984 with The Matrix to create a new form of high-tech overlord scenario.

I probably would have missed this one if it wasn’t for my DVD club. While the “borgs” of Eyeborgs caught my initial attention, the description of the story is what sold me on it. After watching it, I was glad I had a chance to see it, even if it was direct-to-video. While not up to Terminator or Robocop standards, this is one of the better movies to come down the wires in some time.

The Story: The on-going threat of terrorism has led to the adoption of the “Freedom of Observation” act. This gives the Department of Homeland Security new weapons in their surveillance of US citizens. Among them are the “Eyeborgs,” cameras with robotic legs that allow them to move around. Coordinating them, and the millions of already existing stationary cameras, is the Optical Defense Intelligent Network… “O.D.I.N.” for short.

DHS agent R.J. “Gunner” Reynolds (Paul) is observing a gun sale to a possible terrorist whose targeting President Hewes. The person gets away, but is later caught when eyeborgs see his bike at a punk show where the President’s nephew, Jarett, is playing with his band. The person is captured for targeting Jarett and interrogated at a DHS office. Leaving the man alone for a few minutes, he manages to escape when the eyeborgs in the room attack him. He dies later when the eyeborgs force him over a railing and causing him to fall six stories to his death. It was determined via surveillance cameras that Reynolds left the door unlocked allowing the man to escape, but Reynolds did lock the door. He begins questioning the integrity of O.D.I.N. as other people involved with the investigation die in mysterious ways while the eyeborgs give a very different version of the truth.

“See with your own eyes… not theirs.”

O Say Can You See? Just when you the plot is pretty much cut-and-dried, the big twist comes when Reynolds tries to get Jarett from the Presidential Debate. That’s when Reynolds, and the viewers, figure out what the truth is. O.D.I.N. has been manipulating reality, or whoever is manipulating O.D.I.N. to manipulate reality, for their own end.

“Everybody knows that videos can be faked. Regardless of the motives of the people, they’re designed to confuse you, so you must ask yourself, each and every citizen of this country, ask yourself one question and one question only - Who do you believe? A government that is sworn to protect you, or a ratings-hungry media beholden to no one?”

For the most part the movies works well, but you might see a problem with some of the eyeborgs late in the movie. The colors reflecting from the machines feel “off,” and some of the eyeborgs appear to be two-dimensional sprites instead of 3D during the rescue scene. Probably a result of being rushed to video.

Conclusion: Given the current state of terrorism-generated paranoia, Eyeborgs seems like just the ticket to stoke those tin-foil hat fires. While it may have avoided theatrical release (and competition from Iron Man 2), it shouldn’t be left out of your home video collection, especially with recent disappointments from Hollywood. 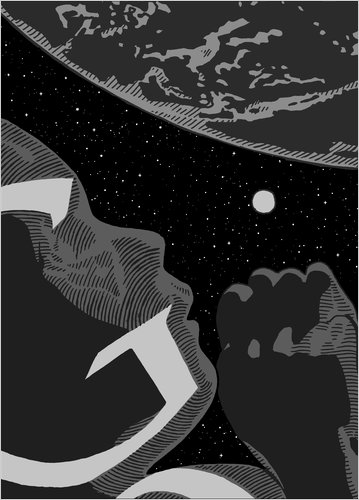 “I ACTUALLY think most people don’t want Google to answer their questions,” said the search giant’s chief executive, Eric Schmidt, in a recent and controversial interview. “They want Google to tell them what they should be doing next.”

“G” as in God? Whether you found it online yesterday (31-Aug-2010) or in today’s dead tree edition (or just hearing about it now), cyberpunk’s godfather William Gibson gives his op-ed about Google’s want of playing god in telling us what to do.

OK, it’s not because of Google’s want of telling us what to do, but the apparent need of anyone who uses the big “G” to decide what they want to do. Those who use G’s services actually contribute to the search giant’s ability to make decisions for us. Gibson likens G to a genie that can grant our wishes:

We would all very much like to be sagely and reliably advised by our own private genie; we would like the genie to make the world more transparent, more easily navigable. Google does that for us: it makes everything in the world accessible to everyone, and everyone accessible to the world.

Of course, the “everyone accessible to the world” part is what some balk at as we find our personal information being more and more exposed online.

The inmates run the prison. The idea of Google being a sort of panopticon prison, with G as the proverbial omnipotent warden and us as the inmates, but Gibson argues that is only half-true:

In Google, we are at once the surveilled and the individual retinal cells of the surveillant, however many millions of us, constantly if unconsciously participatory. We are part of a post-geographical, post-national super-state, one that handily says no to China. Or yes, depending on profit considerations and strategy. But we do not participate in Google on that level. We’re citizens, but without rights.

As said before, it’s the people who use Google’s services who actually contribute to the building of the panopticon, and the real problem comes in when those people (over)expose themselves on social network sites. Gibson sees possibilities in a fake identity industry for such carelessness since Google doesn’t seem interested in protecting users from their own stupidity.

Don’t blame the government. It would be easy to do so IF the advances in technology wasn’t so quick. But when the only law Google follows is Moore’s Law, technology will always stomp a mud hole in legislation’s face and walk it dry:

We also seldom imagined (in spite of ample evidence) that emergent technologies would leave legislation in the dust, yet they do. In a world characterized by technologically driven change, we necessarily legislate after the fact, perpetually scrambling to catch up, while the core architectures of the future, increasingly, are erected by entities like Google.

Then again, Google is “a very large and powerful corporation to boot.” Too big to fail, and far too big to give a fuck.

This post has been filed under Internet Find, News as Cyberpunk by Mr. Roboto.
Permalink • Print • Email this page • 4 comments

WordPress database error: [You have an error in your SQL syntax; check the manual that corresponds to your MySQL server version for the right syntax to use near '' at line 1]
SELECT COUNT(ID) FROM

Help
Made with WordPress and the Semiologic CMS | Design by Mesoconcepts